‘Few regions of France can match the Loire for singularity. Challenging grape varieties; edgy balance; a spectrum of sweetness, minerality, or the print of lees in place of fruit – this northern ribbon of vineyards flutters to its own breeze.’ ANDREW JEFFORD, The New France

The Loire Valley has become a dynamic region. A mix of young energetic winemakers have reinvigorated this historical and stoic region where many veteran winegrowers have long been the backbone. There's been a lively exchange of information, and the wines are all the better for it.

To get you up to speed we've put together a Loire Valley Sampler Six Pack $239 - which includes a 15% discount, notes and a map.

Sit back and sip your way around the Loire Valley. We’ll start in the west in Nantes and work our way inwards traversing through Anjou, Saumur, Vouvray and Touraine, finishing in Sancerre.

Within France, the Loire Valley region produces the greatest diversity of wine styles. The array of wines made reflects the different sub-regions that share little in common due to the region’s sweeping expanse. It’s an exciting mesh of sparkling, dry, sweet, rose and reds styles.

Known as the garden of France the Loire Valley is a prolific food bowl producing delectable treats across cheese, cherries, apples, butter and vegetables. Covering 1000km from east to west, this picturesque region is a feast for both your eyes and tastebuds.

Historically winegrowing dates back 2000 years. The monks developed the vineyards and when the Count of Anjou, became king of England in 1154 the wines of Anjou fell into favour in both France and England – for almost one thousand years. Many castles were built to defend against invaders from England and the Saracens/Moors from Spain and North Africa. The Loire river was a major trade highway for transporting goods to Paris as well as England.

Success continued to ebb and flow over time but the French Revolution threw the region into turmoil. And a few hundred years later both phylloxera and the invention of rail dealt another devastating blow. But rebuilding based on quality rather than quantity has paid off.

Nowadays it is made mainly of small family holdings where the baton passes down to the next generation. An injection of interest from younger winegrowers coupled with the wide interest in biodynamics and quality viticulture has reinvigorated the region.

The effects of climate change have been positive here, giving more consistent ripening in what was a marginal place.

Most whites are nervy with a refreshing bolt of acidity. Better still prices remain modest as it is still a relatively untapped region. Vintage variation plays a huge part in determining the styles to be made that year. In warmer vintages, where botrytis may be more prevalent then the much adored and age-defying sweeter wines will be made. Conversely, cooler vintages where grapes may struggle to ripen sees a lot more sparkling made.

Rose and elegantly framed reds are also a region specialty where oak and alcohol are both kept to modest levels.

The Loire river is the vital vein. Historically it shipped wines to Paris and England which helped build notoriety.

Given the marginal climate of the Loire, the river and its many tributaries provide sun-facing slopes and warmer streams (including misty wafts which promote botrytis) encouraging ripeness. It also acts as a great deterrent to frost which can wipe out harvests, especially at springtime where the nascent buds are very vulnerable.

Grapes love to feed on stone, the poorer the better. It makes for more pure flavours in wine, the soul to many of the Loire wines.

Middle Loire around the town of Vouvray is famed for its tuffeau soils.  This is a local limestone very malleable that built many of the castles and chateaus of the area. It also has been carved into converting a myriad of underground cellars for wine, cheese maturation and growing local mushrooms – three of the region’s champions.

The Kimmeridgian limestone chain starts in the east of the region around Sancerre and Pouilly-Fume, extending into Chablis and Champagne.

Warmed by the Gulf stream near the mouth of the Atlantic Ocean where the Loire River finds it freedom, Nantes is the warmest Loire region and home to muscadet.

2019 Pepiere Muscadet Briords $41
There is a sea of uninspiring Loire muscadet, but this isn’t one of them. Made from the Melon de Bourgogne grape (muscadet is the name of the wine), this vivid wine comes from 60-year-old vines within the lauded Nantes area of Muscadet Sevre et Maine.   Textured and charismatic, this wine is crunchy and limpid – a great picnic wine or a tastebud tickler. Serve it early in the night.

It’s the perfect antidote for a plate of freshly shucked oysters.

Combined Anjou, Saumur and Touraine represent the heart of the Loire, accounting for over 60% of the region's production. We’ll dissect this beating heart into the three previously named sub-regions. Anjou is slightly cooler than Nantes, Chenin Blanc starts to emerge. Tributaries shoot off the Loire River and here is where find the distinguished appellation Coteaux du Layon. Steep slopes on the Layon tributary provide a perfect sunny exposition and misty conditions for the development of noble rot (botrytis) if desired.

2015 Baumard Carte d'Or Coteaux du Layon $49
Baumard is a formidable chenin blanc producer across all styles, from dry to sweet. But it is their sweet wines which seem to eclipse all others.   Winemaker Florent Baumard is revered for his Quartes des Charmes, a single vineyard botrytised wine. This wine, his Carte d'Or is a blend of sites which he thoughtfully keeps fresh by not burdening it with too much sugar (its sweetness is balanced with zesty line of acidity). It's a delightful and lively rendition that will age well or give pleasure right now.

'The palate shows a very appealing concentration, with white peach, white pear flesh, a delightfully match-sticky freshness and also a beautifully bright acidity…this has very nice fruit and tension, but also a delicious minerally frame for it all. Very good indeed.' thewinedoctor.com

Just up-river from Anjou, the main focus of Saumur is sparkling wine.  And the cooler the vintage, the more sparkling is made (using all the grapes sitting on the knife-edge of ripeness). Surprisingly they make their sparklings in the methode traditionnelle style – mimicking those of Champagne. This attention to detail accounts for its worldwide recognition at very reasonable prices.

Maison Langlois Chateau Cremant de Loire Blanc Brut $38
One of the larger and well-established houses, Maison Langlois was established in 1912. In 1973 it was purchased by the Champagne heavyweights Maison Bollinger. It’s an overachiever in its class, hands down.

A blend of white and black grapes (Chenin Blanc, Chardonnay, Cabernet Franc and Grolleau) this refined white sparkling is lively and elegant, with slight hazelnut and brioche tones thanks to spending two years on lees.  And don’t be alarmed by the addition of black grapes – pinot noir is one of the main players in Champagne – the trick is not to press the black skins so no colour uptakes.

Based on the commercially important town of Tours, this is the capital of the Loire château country. A playground for the Parisian weekender’s rural paradise, the local tuffeau limestone features strongly above and below ground.  Chenin Blanc reigns supreme in whites (from dry to sweeter styles) in Vouvray and Montlouis and Cabernet Franc leads the charge on reds in Bourgeuil and Chinon.

2018 Domaine Poultiere Tuffo Vouvray $36
Damien Pinon is the third generation of his family to naturally farm Chenin Blanc in the chalky soils of Vernou-Sur-Brenne in the appellation of Vouvray. His vines are old, creating lush, expressive white wines.

The Tuffo cuvee is intensely aromatic and loaded with flavours of quince and apple. It has a wonderful complexity to it, hitting at first with a burst of fresh fruit and finishing with a vibrant minerality. This beauty is incredibly food-friendly, a great compliment for everything from roasted chicken, to fish in rich sauces to grilled sausages.

Tragically Frédéric Mabileau was killed in a light plane accident on the eve of vintage 2020. His resilient wife Nathalie and sons Charly and Rémy have been quick to carry on his masterful work. His family’s winegrowing history dates back to 1620, and Frédéric skillfully combined age-old traditions with forward thinking. Organically certified, the vines are biodynamically grown and chemicals eschewed.

This red is light, fruity and full of finesse. It epitomises everything that this unique terroir offers in terms of purity, freshness and pleasure.

Moving further east, Sancerre holds both historical and modern-day importance and is part of the Central subregion.  This is the smallest region making up just 8% of Loire’s production due to the cold continental climate and its hilly outlook. Elevation ranges between 200-400m which further adds to the racy nature of these wines.  Blessed with kimmeridgian soils (rich in limestone and seabed fossils) and a powerhouse front of thoughtful and proud winegrowers.

2019 Gerard Boulay Chavignol Sancerre $78
A blend of single sites including younger vines from Sancerre’s finest vineyard La Grand Cote, this is an exceptional introduction to Sancerre and Boulay’s wizardry ways. Boulay’s family history within wine dates back to 1300, which shows in the prized vineyards he has in the tiny revered village of Chavignol.  Working with old and intense 45-year-old vines, hard manual labour is preferred over pesticides and herbicides.

Chavignol offers one of the most remarkable terroirs, mineral freshness of the limestone-rich soils and the sun trapping, south-facing exposition. This Sauvignon Blanc has dimension and subtlety, it offers a combination of hedonistic texture and racy, crunchy minerality. It is incredibly delicious and beguiling, twisting your arm for another glass.

The local goat's cheese, Crottin de Chavignol is a delightful tangy match to this Sancerre.

The Boulay style is a world away from the regular refreshing but forgettable norm... [it] should really be compared with a white burgundy in terms of its rewards and complexity JANCIS ROBINSON MW 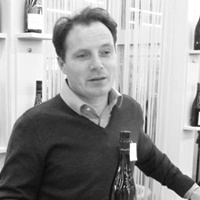